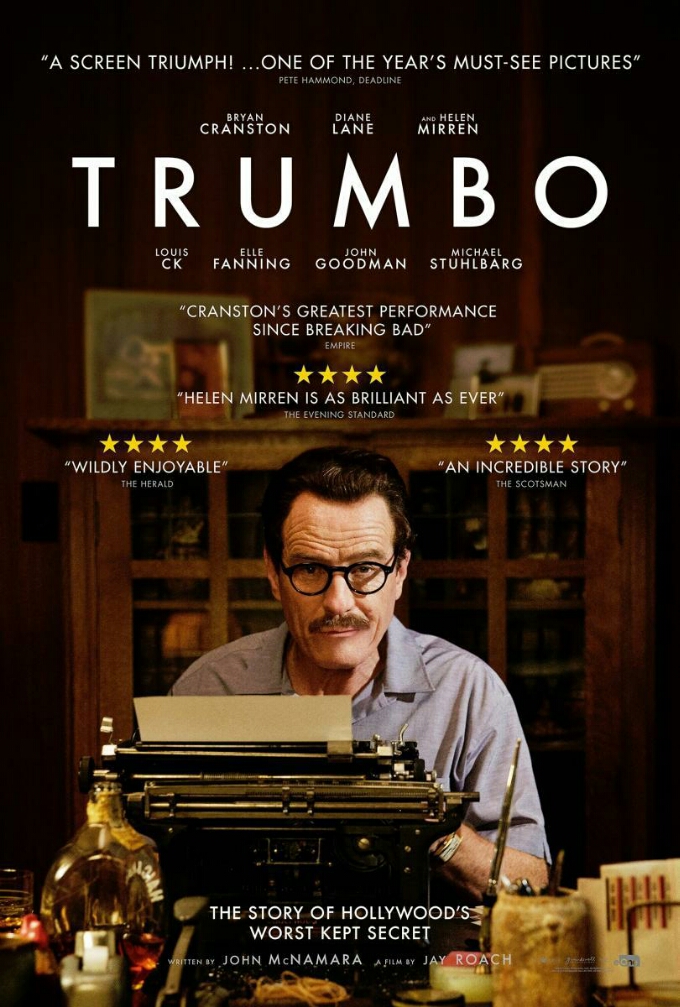 Couple of days back, I got to watch the Bryan Cranston-starrer Trumbo, based on the life of the Hollywood screenwriter Dalton Trumbo who was blacklisted because of his membership of the Communist Party of the USA.

The movie, while not being exceptional, is entertaining and well-paced but the main thing that struck me was the way in which people were demonized and discriminated against because of their beliefs and views. This practice is now infamously called McCarthyism. Wikipedia defines it as :

You see, nationalism is a profound idea and one of the greatest binding factors across the world. Like religion, nationalism bounds people, in addition to getting them worked up, in a way few other things can. History shows that this can be beneficial, e.g., the Indian freedom movement, particularly its latter stages like the Quit India Movement which mobilised the whole country to fight the British rule. But what about the times when nationalism is used to discriminate people. In a scene from the film, there is an argument between Trumbo (Bryan Cranston) and John Wayne (David James Elliot). Wayne says that Trumbo’s view – and that of the communists – of the First Amendment and the rights of the movie crews is wrong. Trumbo counters that both his and Wayne’s views are wrong, but both have a right to be wrong and are entitled to their opinions. It doesn’t mean one can forcefully impose his view or way of life on the other.

In contemporary India, we’ve seen a lot of times in many states regardless of the party in power that people are vilified and demonized as being traitors or, more trendily, “anti-national” for their statements or the views they hold. The thing is, a country like ours, the largest democracy in the world which has survived – nay flourished – for 69 years despite all the hardships, without any decay in its democratic set-up, has a constitution that gives people right to their freedom of expression. Now unless and until my freedom of expression interferes or undermines your freedom of expression, I don’t see why two people, or two set of people can’t have contrasting opinions on the same thing. I mean, its pretty simple, right? If I believe something should be a particular way and you believe otherwise, I am free to have my opinion just as you’re free to have yours. And if I feel that your view is the wrong one, I can always talk to you and sort the differences out. Why do we need to take the help of violence or demonize someone? If he/she is wrong, the courts can decide on the matter. The recent Kanhaiya Kumar case is an example. To make my position clear, let me state that I don’t want to get into the politics of it all. Now you may choose to think he’s anti-national or you may choose to think his video was doctored. That’s one thing. What is undisputable is the fact that he, and a few journalists, were beaten by some lawyers in the Patiala House court complex. Now that – lawyers (of all people) taking law in their own hands to teach a supposed traitor lessons in patriotism isn’t what democracies are about. If we have to do that, why not go back to mob lynchings, medieval feudal systems and monarchies. And why bother with the police and courts? Let everyone dispense justice as he sees fit, whether that be through whatsoever violent means. Except that, in such a scenario, chaos and anarchy would reign supreme.

That is what I thought when I was watching this film. Whether or not Dalton Trumbo and the rest of the Hollywood 10 were guilty of conspiracy against the USA was something that should have been left for the courts to decide (a lower court did find them guilty and the liberal minority of judges in the US Supreme Court put paid to their hopes of an appeal). Ganging up on them and depriving them of their right to opinion, and more importantly, denying them their right to work, was the real conspiracy. History, that old wily SOB, saw to that. So I’d say, let’s cool things a bit here, in the present. There are far more pressing issues at hand, like the suicides by farmers, the state of the economy, the employability of our graduates etc. Let’s utilise our time in discussing solutions to these problems. Someone chanting (or not chanting) a slogan won’t get the distressed farmer’s family two square meals. And if you still feel about these “issues”, remember that the varying views and debates around them are an integral part of what the idea of India is all about. Our constitution was written after innumerable debates and deliberations. Let’s respect that. Let’s behave like civilised people and hear each other out. Maybe what the other side is saying is not all rubbish. Maybe it has something we could learn a thing or two from.